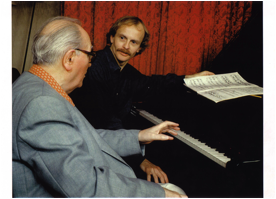 Håkon Austbø met Olivier Messiaen for the first time in 1970. He had already performed several of the composer's pieces and worked with Messiaen's wife, Yvonne Loriod, who advised Austbø to enter the international Messiaen Competition at Royan the next year. In preparing for the competition, Austbø worked at several occasions with the composer not only on his own music but also on Debussy, Jolivet, Stockhausen. The unanimous jury awarded Austbø the first prize and his playing during the rounds was very much acclaimed in papers as Le Monde and Financial Times.
During his whole career, Messiaen's music played an important role in Austbø's activities. He performed excerpts of the two main cycles of Messiaen, Vingt Regards sur l'Enfant-Jésus and Catalogue d'Oiseaux, on numerous occasions in many countries. He performed Oiseaux Exotiques, Réveil des Oiseaux and Turangalîla Symphonie with major orchestras such as the Concertgebouw Orchestra, the Residentie Orchestra, the Orchestre Philharmonique de Radio-France, the Oslo Philharmonic, the Bergen Philharmonic and the WDR Symphonieorchester.
Olivier Messiaen heard Austbø again in 1986 in the Hague and stated the following:

In 1988, at the occasion of Messiaen's 80th birthday, Austbø made a CD recording of excerpts from Catalogue d'Oiseaux. Messiaen consented to be artistic supervisor of this recording and to pose with Austbø for the cover photo (above). At the same occasion they made a double interview for Diapason.
In 1991 Austbø performed the entire cycle Vingt Regards after having worked on the separate pieces since 1969. His performance was a sensation at Utrecht as well as in Oslo. After Messiaen's death in 1992, he undertook the recording of the entire piano work for NAXOS. The Vingt Regards was released in 1994 and immediately acclaimed as a major event (recording of the month in Gramophone). Classic CD compared all the available recordings of this work and Austbø's came out as "the lightning lead". In 1998 the Catalogue d'Oiseaux was released and won the Edison award. It was followed by the Preludes, the Etudes and the miscellaneous pieces, and the final disc, including La Fauvette des Jardins, is planned to be released end 2001.
As this cycle of recordings progressed, Austbø continued to perform Messiaen's works with orchestras, solo, and in chamber music. A unique project worldwide was his performance of all Messiaen's works with piano (excluding the orchestra works) in 8 concerts in Oslo between April, 2000 and April, 2001. Not only the entire piano solo works were performed, including the Catalogue d'Oiseaux in two concerts with projections of images from the landscapes that inspired Messiaen, but also all chamber music works and the complete songs. At this occasion, the Dutch soprano Ingrid Kappelle undertook the huge task of singing the entire vocal _uvre of Messiaen, which the two of them recorded for Brilliant Classics in 2003. Later recordings of Messiaen’s work include Oiseaux Exotiques with Peter Szilvay (Aurora, 2008) and Visions de l’Amen with Ralph van Raat (NAXOS, 2012)
Austbø's performance of the Vingt Regards sur l'Enfant-Jésus in New York in 2000 was a great success, acclaimed by the New York Times. Equally successful was his performance of the same piece in Tokyo, 2002, where the Musashino Hall was sold out for months before.

His investigations into Messiaen’s visions of colours in music led to the research project Messiaen’s colours in 2012/13 which included performances of colour parts in Trois Petites Liturgies and Vingt Regards.
He has also given numerous masterclasses on Messiaen's music in cities like Amsterdam, Hamburg, Berlin, Oslo and Stockholm. When the Messiaen international piano competition was resumed in 2000, he was member of the jury presided by Yvonne Loriod.